Blog: It's all in a name

The story of a room

It’s all in a name 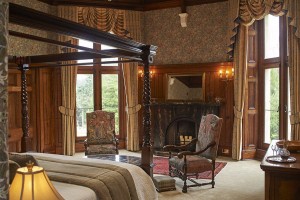 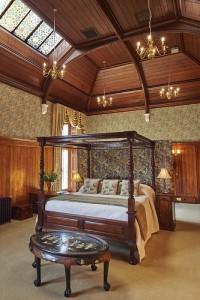 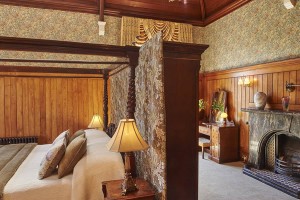 One of Palé Hall’s most spectacular rooms, now fully restored to its original baronial splendour.

As our opening date approaches, and we are so tired that thinking straight becomes a challenge, it’s enervating to reflect on just how far we have come.

The Robertson suite – as was – had different incarnations in its previous lives. Built as the gentlemens’ withdrawing room, complete with snooker table, two fireplaces, rich panelling and beautiful stained glass roof lights, from a time when ladies and gentlemen separated after dinner. The ladies to the (with) drawing room for tea, whilst their menfolk partook of brandy, cigars and rather less genteel conversation.

When we originally viewed Palé it had morphed into a meeting room, having lost most of its panelling and with the roof lights broken, blackened with tar and covered over with plastic conservatory roofing. It’s a really big room and it gave us pause whilst we decided on its best use.

We called in the listed buildings officer for advice. We did a deal. We could knock through to a store room to make it into a bathroom if we put back the panelling and saved the skylights.

We showed it to several stained glass experts and the discussions ranged between restoration, preservation and just covering them up, as some really scary bills were suggested, one helpfully suggesting that it would cost as much as his house to put right. Unsurprisingly it was a decision we put off until about a month ago when Alan and Jon got up on the roof and lifted the algae-slimed plastic cover. What they discovered was encouraging. Under the plastic was a broken glass layer, then the stained glass and then an intact bottom layer. The tar was sealing the top layer and the stained glass together, and came off quite easily as we removed the top. Once we saw what we were dealing with preservation became the clear choice. There are many historic cracks in the painted glass but once cleaned they tell a story of the house. Williams Homes have made us some superbly engineered glazed frames that sit around the sky lights, showing and preserving their beauty. Their team painstakingly cleaned and reassembled the fragile jigsaw. It’s a great job, thank you guys!

We know that Winston Churchill stayed here when it was owned by the Duke of Westminster. This has led us to rename the room, so Robertson has become Churchill, whilst we have respectfully named the largest dining room The Henry Robertson Room. It has also led to a flight of pure fantasy. While we basked in the glory of this beautiful suite we wondered how the glass had got so badly damaged. We imagined an adventure involving Churchill, a Luftwaffe secret mission and a near miss. It’s rubbish of course, but a house like Palé inspires you to weave tales and start legends.

The finished room is stunning. It’s a baronial-style triumph, complete with William Morris wallpaper and fabric, a four poster bed and a marble bathroom with a copper bath.

We think it will be a really popular room. Churchill did join the gentlemen in this very room. It’s a room that resonates history and as a little extra special treat guests will get Alan’s lethal version of a Winston Churchill Martini to welcome you to Palé.