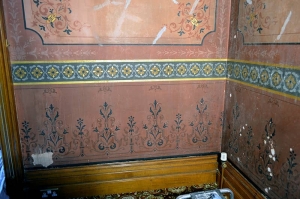 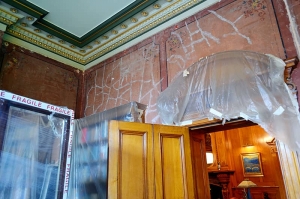 As wallpaper at Palé Hall is stripped away a hidden secret is revealed – original Victorian stencil-decorated plaster.

Palé Hall has been giving up more of its secrets this week. We have long determined that we would remove the bar in the Library, crafted as it was from the marble of removed bedroom fireplaces. It has been taken out very carefully and, where we can, we will re-install the fireplaces. With the bar gone, John and his team began taking off the gold flock wallpaper. It was old but not antique, probably from the early seventies.

We were away when they began but, fortunately, the guys have a ‘just in case’ approach to stripping each new room, so they are incredibly careful. As soon as some pattern and painting began to show on the wall they stopped using scrapers and began using sponges. We returned on Monday evening to an amazing surprise. The walls of the library are covered in the original paint with the original beautiful Victorian stencil designs. They are undoubtedly an important find, created by artists.

Over the years the inevitable modernisation of the wiring and heating systems have cut into them and plaster cracks have been filled prior to wallpapering but in essence the designs are relatively complete. We have contacted our conservation officer, who is liaising with Cadw, and now we are awaiting advice. We would like to preserve and recreate the designs if at all possible. It’s a problem, probably an expensive one, but it’s a wonderful problem to have.