Roof of the world

An insight into Wales's harsh industrial past

Roof of the world 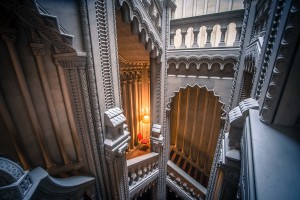 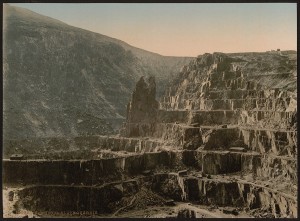 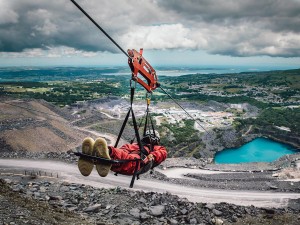 A painting in the magnificent Penrhyn Castle conveys the risk and rigours of historic Welsh slate production.

Well, autumn is upon us with a vengeance. Lowering skies and scudding rain made for an exhilarating journey to Penrhyn Castle last week. The castle was almost deserted when we arrived, so we were able to appreciate its Gothic glory. If you haven’t been then I do recommend a visit. It’s built on a monumental scale with money made off the back of slate and slavery. It was built to impress and impress it does. Many of the features are original, wallpapers, curtains and upholstery all contributing to a time capsule of a bygone era.

There was one particular piece that drew my attention. It is an 1832 painting of the slate mine in Penrhyn by the artist Henry Hawkins (to see the painting click here). It captures the intense labour involved and the precarious nature of the work. I had never thought about it before; the danger, the human endeavour and the sheer number of workers. Roofing slate production dominated the north Wales economy in the 19th-century and Welsh slate was, and continues to be, recognised around the world for its quality.

I have to be honest, to modern eyes it looks like hell on earth. Physical conditions were harsh. Wielding the hammers and chisels, men would dangle on ropes round their body and legs from pins at the top of the gallery in which they were working; the ropes often broke! It’s a sobering thought. The slate we have on the roof at Palé would have been hewn the same way. The world may have gone mad but, in some ways, it is a better place to be now.

We have just got our bat license so we can begin work on the roof of the coach house soon. We are awaiting the new planning and listed building consent but can commence some of the work under the old planning permission. The roof of course is slate and most of the original slate will have to be replaced. It’s clear that producing slate is still tough, hard work. While mechanisation has replaced the men hanging from ropes, much of the slate continues to be split by hand.

Autumn is a time of abundance in nature, and true to our beliefs that local and fresh is best, our menus have changed to reflect the bounty that surrounds us. I KNOW that I say this every time, but it is true, this is our best menu yet. There is a buzz about the kitchen at the moment. They know that this is a really well balanced and finely tuned menu and they are justifiably proud of it. There are a few places left at our evening with Gareth Stevenson on the 18th October where you can taste a wonderful menu with wine pairings and meet the Chef himself.

To finish, two of our staff have been involved in car crashes over the last week. We are grateful beyond belief that they are okay, a little bruised and a lot of shock but back at work, thank goodness.

Have a great weekend