Blog: The kindness of people

The kindness of people 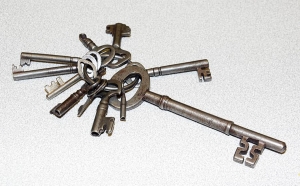 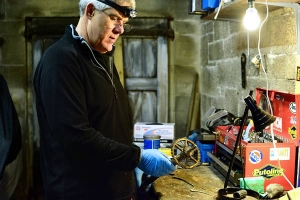 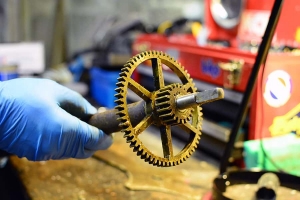 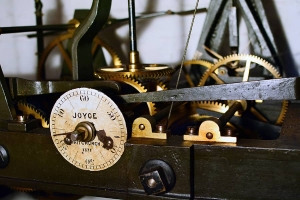 Seized mechanism on west face of Palé Hall’s historic tower clock has been removed for repair.

Last week, out of the blue, we had an email from Tom Jones (no, not that Tom Jones – at least we don’t think so!) His mother used to live at Palé Lodge and still had a set of Palé Hall keys. Her stepfather, Mr Davies, was a gamekeeper here. They arrived in the post this morning – wow, twelve beautiful antique keys. The kindness of people!

As we mentioned last week John, our premises manager, doesn’t like to be beaten by anything and the fact that only three faces of the clock are working has been bothering him. He explained to us that bits were rusted together and couldn’t be sorted from inside the tower. Today, our painters John and Craig scaled the tower on the outside (I don’t do heights so couldn’t watch). They removed the hands and now our John has freed the rusty bits. The outside of the tower needs to be scaled once again to put them back in place … John and Craig didn’t have to do it, we didn’t even ask, but once again, we meet the kindness of people.

Last week’s post introduced the Palé Hall team so far. This week we must mention in despatches the team that Williams Homes has put together. Mark, the plumber, arrives first, usually by 7am. He is doing sterling work on the bathrooms and they are looking fabulous. We mentioned Mark in an earlier post; his father worked here and now Mark’s nephew Carl is working here too. We love that continuity, and like to think that one day Carl will be working alongside his son, telling him about working here when he was a lad. The whole team will do anything we ask of them, beyond their job spec, outside their working hours, always kind, always helpful, even when the female of this partnership is being picky … which I am, on occasion, but hardly ever …

What can we say? But, to all those kind people,